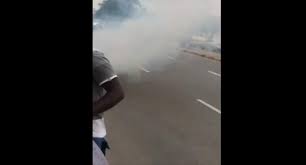 Violence broke out in the nation’s capital as protesters of #EndSARS had a faceoff with security operatives.

In a viral video, the protesters who were seen running helter-skelter, were allegedly being tear gassed and shot indiscriminately in order to disperse the procession by security forces.

Some of them were heard shouting “they are shooting at us”, “don’t kill us with teargas”, “you must #EndSARS.”

Earlier, the Inspector-General of Police, Mohammed Adamu, condemned the violent attack on policemen and damage to police operational vehicles and other assets by #EndSARS protesters in Ughelli, Delta State, on Thursday.

He also ordered a probe into the incident which resulted in the death of Corporal Etaga Stanley attached to ‘A’ Division, Ughelli.

The force spokesman, DCP Frank Mba, in a statement on Friday, said the protesters also carted away one service AK47 rifle with breach no 56-2609008 and 25 rounds of live ammunition that was with the deceased at the time of the incident.