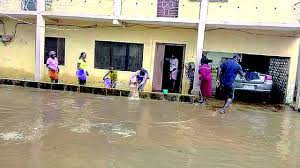 First class traditional ruler in Kwara State, Oba Muftau Gbadamosi, Olofa of Offa, has called on government at all levels to come to the aid of those whose farmland and houses have been submerged by flood to alleviate their sufferings.

The Olofa of Offa, made the call while speaking with journalists in Offa on the effects of rainstorm that destroyed properties and farmland in the state and across the country in recent time.

According to him, “flooding has been a yearly occurrence and that government should find a way of relocating the victims to upland.”

Oba Gbadamosi also commended the Federal Government for assisting poultry farmers with maize during the period of COVID-19 pandemic lockdown and called on government to give assistance to the farmers that recently affected with heavy downpour of rain in recent time.

He said, “The farmers are looking forward to more assistance from government.”

Oba Gbadamosi also expressed satisfaction with the cordial relationship that existed between farmers and harder in Offa community.

He, however, urged the people of the area to continue to live in peace with one another irrespective of their ethnic or religious background.