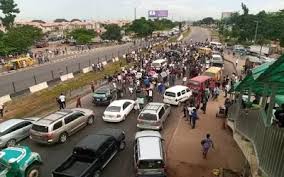 There is massive gridlock on Lagos-Ibadan Expressway as #EndSARS protesters have shutdown the expressway.

The hundreds of protesters, which had earlier caused massive gridlock in Alausa when they came to protest at the State House of Assembly marched to the expressway, blocking the Alausa section of the road.

The protesters, armed with placards barricaded the highway from the Secretariat bus-stop, opposite Magodo Phase II.

The effect of the gridlock had begun to extend to the Otedola Bridge along the Lagos-Ibadan Expressway.

On Friday, thousands of protesters stormed the State House of Assembly to demand outright disbandment of the Special Anti-Robbery Squad, SARS, over series of atrocities committed by the operatives, killing and maiming innocent citizens.

The protesters blocked the road leading to the State House of Assembly, causing traffic gridlock in the area.

He charged the police authority to ensure it put a stop to the incessant harassment of Nigerians by some officers of the anti-robbery squad, adding that any officer of the squad found to.have harassed innocent Nigerian should be arrested and prosecuted.

‘It’s okay to protest but I say clearly that it is wrong for any law enforcement agent to maim or criminalise another Nigerian without reasonable course. The police or the law enforcement agents must do their job. In doing that job, you cannot trample on the right of the citizens.

“You cannot say our youths, because of their looks or they are carrying computer are guilty of a crime. The police job is to arrest people and send them for prosecution if they do something wrong. That tenets must be adhered to.

“We are not against police fighting robbery but we are saying do not unjustifiably hurt our children because of their looks. Whoever is responsible should be arrested and prosecuted,” he said.