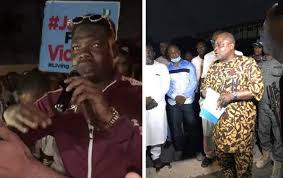 In a tweet shared by a Twitter user, Mr Macaroni was seen demanding the presence of the Lagos State governor or his deputy from the state’s CSO.

In the absence of the governor or the deputy, he demanded the presence of the state’s Speaker.

The Instagram sensation who was also joined by other protesters while addressing the Lagos State House of Assembly Speaker, Mudashiru Obasa, said that the government works for the people and if the people want a job done, the government must do it without delay.