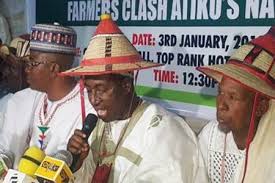 National leadership of Myetti Allah Cattle Breeders Association and leaders of herdsmen resident in the state met with Governor David Umahi in an enlarged security meeting in Abakaliki with all the security Chiefs and the local government Chairmen in attendance.

At the end of the meeting, the governor and the National Secretary of Myetti Allah Cattle Breeders Association, Baba Othman Ngelzarma, who addressed the gathering, warned against inter-state movements of herdsmen, night and underage grazing in the state.

They also warned against destruction of farm crops by cattle rearers and killing of cattle by their host community.

“Myetti Allah must look into the movements of herdsmen from another state into Ebonyi State. Does it mean that Enugu State doesn’t have pasture, Abia State doesn’t have pasture? It’s an act of provocation and we will not allow that. We have to fight those who are coming into the state to destroy the peaceful co-existence between us and the herdsmen who have lived with us in this state for long. The National Secretary has said it all. He said you have two choices.

“These people are not from Nigeria, they are migrating; they are going with sophisticate weapons. You have a choice of stopping them or reporting to security agents to also stop them because when they destroy things, we say it’s the Fulani people that did it, no.

“So, let us solve our problems by ourselves, let us show more understanding, let us live in peace,” he stated

Earlier, Miyetti Allah leadership, spoke through its Secretary, Baba Othman Ngelzarma, also state the preparedness of the association to embark on training of the herders to avert further crisis in the state.