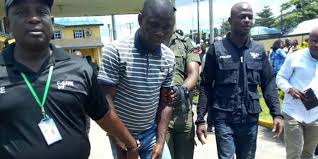 A High Court sitting in Port Harcourt, the Rivers State capital, on Friday, sentenced Gracious David-West, a serial killer, to death by hanging.

Presiding Judge, Justice Adolphus Enebele, while delivering his judgement on Friday, said the suspect was convicted of the murder of eleven young women and attempted murder of a prospective victim identified as Benita Etim in a hotel in 2019.

Justice Enebele stated that the prosecution team was able to convince the court that David-West actually killed all eleven women at various hotel rooms in Port Harcourt and other parts of the state.

The court however discharged and acquitted the second defendant in the case, Nimi ThankGod, who is facing one count of misconduct with the corpse of one of David-West’s victims.