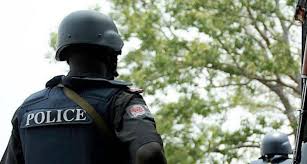 The victim was released by his abductors and reunited with his family at about 9:pm on Thursday, after payment of an undisclosed sum of money as ransom.

He alleged that the gunmen had at the late hours of Tuesday abducted the former commissioner at his residence at Akunza Migili, an outskirt of Lafia and demanded N30million ransom for his release.

The abductors, armed with sophisticated weapons had invaded the residence of their victim, who is also a senior lecturer in the department of political science at the Federal University, Lafia and whisked him to an unknown destination at about 8:30pm on Tuesday.

Uhembe, while recounting his ordeal in the hands of his anductors to a crowd of sympathisers at his residence Thursday said he saw hell in the kidnappers’ den as he was chained for three days without food.

“My abductors chained me throughout the period I was in captivity and warned me not to talk too much because I was trying to make them see reason while they should denounce their criminal ways and find legitimate means of livelihood.

“I had trekked for about six hours with them from my house where I they picked me to a thick forest around the Adogi area of Lafia.

“There are many other kidnapped victims abducted from different parts of the country, who are still being held in that forest. I observed that they have a very strong network and a unique way of communication within the forest”

The former commissioner further revealed how he was handed over to another set of the abductors on reaching the forest on the fateful night.

“They run shift. Some of them will go out and abduct their victims and hand over the victims to another set of people upon reaching the forest. Those ones are responsible for chaining and monitoring the kidnapped person.

“The kidnappers camping in that forest are in large numbers. Those of them that came and abducted me were ten. Out of this number, eight were armed with AK47 rifles while the remaining two had machetes and other sharp objects”

According to him the kidnappers were specialists in their form of crime, who understand and could speak almost all the local dialect in the state.

“My experience in the kidnappers’ den is something one will not wish even his worst enemy to pass through. I really saw hell.

“They told me they were misinformed by their informants about my financial status. That the information given to them about me was that I am rich, I received N1.5million from the state government every month and that I own a flashy black car,” Uhembe further revealed.

He thanked God for sparing his life and appreciated the state government, security agencies, his colleagues, friends and relations for their prayers and support towards his safe release.