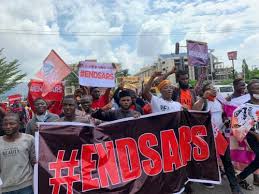 As many Nigerians are demanding that SARS should be scraped, some angry youths on thursday staged a protest in Abuja over the continued harassment and intimidation of citizens by the Special Anti-Robbery Squad.

The protesters has vowed not to leave the premises of Nigeria Police Force headquarters in Abuja until the Inspector-General of Police, Mohammed Adamu, addressed them.

The protesters turned down the entreaties of Force Public Relations Officers, Frank Mba, for them to call off the demonstration.

The protest, which was led by human rights activists, Omoyele Sowore, Deji Adeyanju, Aisha Yesufu, Raphael Adedayo and others, paralysed vehicular traffic in the central area of Abuja where the police headquarters is located.

It was also quite dramatic as the placard-wielding protesters poured red paint on the road to represent the alleged killings and bloodshed by SARS operatives.

The protesters said many of the SARS operatives have been indicted for rights violations, including extra-judicial killings, extortion, illegal detention and other misconduct.

Graphic footage showing SARS officers dragging two men from a hotel in Lagos and shooting one of them in the street had sparked mass fury across the country and fuelled long-held demands for reforms.

Meanwhile, the former, Inspector-General of Police, IGP, Mr. Mike Okirohas has cautioned against the ban of the Special Anti-Robbery Squad (SARS).

Okiro said the squad should be rebranded and refocused for effective service delivery rather than being banned.

Speaking with journalists on Thursday, the former IGP said the ban of SARS would lead to more robbery activities, adding that robbers would be happy at the ban of SARS.

He stressed that the police management should go to the drawing board and retrain personnel of the SARS as it will be counter-productive to disband them.

“You cannot throw away the baby with the bath water, if they have deviated from what they were established for, they should be retrained and refocused.

“Armed robbers will be happy that there is no more SARS in the country but are Nigerians ready for that” he said.

He said that the squad had derailed from the primary purpose of tackling armed robbery that it was established for.

“Members of the SARS are doing things that are different from their training,“he said.

He called for stiff punishment for any member of the squad who violates the code of conduct to serve as a deterrent to others.