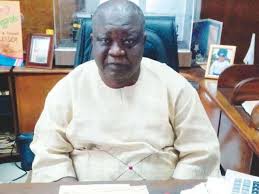 The Managing Director of the Nigerian Railway Corporation, NRC, Engineer Fidet Okhiria has commended president Muhamamdu Buhari and the Minister of Transportation, Rt Hon Rotimi Amaechi on his reappointment as the managing director of the NRC.

The railway MD who spoke to Journalists after he collected his letter thank the government of President Muhamamdu Buhari and the Minister of Transport, Rt Hon Rotimi Amaechi for trusting in him and giving him the opportunity to continue development in the railway sector.

Okhria said: “I want to thank the Federal Government and the Minister of Transport for finding me very worthy to be reappointed for another term. On my own side I promise to work harder than ever before, so that a good legacy will be left in my name and for the administration of President Muhamamdu Buhari. I promise to rededicate myself and put the nation first and be selfless.”

The railway boss also gave some insight on projects that has been embarked by the railway Corporation, stressing that in no time, more stations will be commissioned.

Okhiria said: “Two weeks ago the cabinet approved Kano to Maradi, and today, Port Harcourt to Maiduguri with other branch lines for a place like Damaturu. We want to ensure all the contracts awarded commence. Lagos-Ibadan will start probably by November so that people can use the train service during the Christmas and New Year holidays.

The MD also said that all plans to ensure that issues that can act as impediments with the outlined plans are been resolved to ensure the smooth sailing of the projects and commencement of commercial operations.

“We are working hard towards it so that what will prevent us from starting now will be resolved before then, ensuring that the stations are in place. For Itakpe -Warri, we are ready to start our commercial operations,” he said.