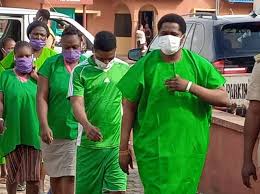 Justice Olusegun Odusola of the Ondo State High Court has sentenced the founder of the church Sotitobire Praising Chapel , Pastor Samuel Babatunde, popularly known as Alfa Babatunde, to life imprisonment over the disappearance of a one-year-old boy, Gold Kolawole who went missing within his church premises.

Gold Kolawole was declared missing November 10, 2019, during a church service at the children’s section of Sotitobire Praying Ministry which is located at Oshinle Quarters in Akure, the state capital.

The convicted clergyman was arrested leading to public uproar alongside seven other members of the church and were all arraigned before a magistrate court on six counts.

The matter was later transferred to the state High Court.

Delivering his judgment in the case today Tuesday, October 6, Justice Odusola said, based on the evidence provided by the prosecution team, the clergyman and the five others were found guilty of two counts of kidnapping, and aiding and abetting to kidnap. He thereafter sentenced them to life imprisonment.