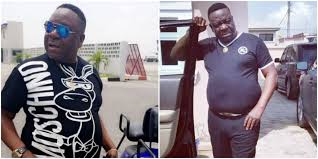 According to the celebrity, his stomach became so big as a result of the poison to the point that he could not see his legs

Veteran Nollywood actor and comedian, Mr Ibu, recently got social media buzzing after his revelation about his close shave with death on different occasions.

The film star recounted how he was poisoned by members of his staff and how they were paid to eliminate him perhaps because of envy.

In the interview with Nigezie, Ibu who is also known for his very big stomach, disclosed that he does not take alcohol and that he eats very little but that his belly started to grow very big after he was poisoned.

The actor said that the belly eventually started to reduce after he took medicine and that he was finally able to see his legs again.

Speaking further, the actor who was very grateful to be alive said that if not for God, he would have been a story and that even people in his office were guilty of poisoning him.

According to the film star, his staff members heard him falling around in his office but did not come to help because they were the ones responsible.

He said that he was also took their poison a second time because he never suspected them until God opened his eyes.

Mr Ibu said that members of his staff had been paid handsomely to eliminate him probably because he was doing well with himself seeing as he built a house in his village and bought another in Lagos.