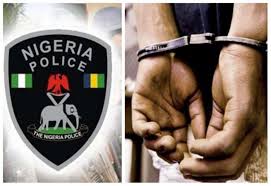 The Osun Police Command has arrested a teacher, Gbenga Samson Ayenioye and his friend, a theatre practitioner, Tunde AmokeOja, for allegedly raping a 16-year-old girl (name withheld) who is said to be one of his students.

The civil servant and his friend, Amokeoja were arrested for allegedly rapping the teenager on different occasions.

It was gathered that Ayenioye, who was a Financial Accounting teacher at Osogbo Grammar School, invited the girl; his students, to a relaxation centre at Latona area in Osogbo on Sunday, February 16, 2020.

Ayenioye, a married man, in his early 40s, was said to have allegedly forced the girl to bed and later introduced her to his friend, AmokeOja, a theatre practitioner on the promise that he would assist in developing her film acting skills in order to be able to raise funds for her WAEC fee.

Ayenioye has been recently transferred from the school to the State Ministry of Education.

On February 18, 2020, AmokeOja, a film production manager, allegedly asked the teenage girl to meet him at Delightful Gold hotel along Onibueja road in Osogbo, to feature in a film.

The girl was said to have honoured the invitation at the hotel where she was allegedly raped by AmokeOja in one of the hotel rooms when she was asked to go and change her dress, it was learnt.

The duo had threatened their victim not to disclose the ordeal to anyone and advised her to take water with plenty of salt after which the girl bled for 15 days following the incident.

During a counselling programme organised by a non-governmental organisation in Osun State, Value Female Network (VFN) for young girls on sexual reproductive health and rights, the victim was said to have divulged her ordeals to the NGO officials.

When contacted, the head of the gender unit of the NGO, Moriike Yaagboyaaju confirmed that the victim informed the NGO that she was raped by the duo.

It was further learnt that the suspects were arrested by the Dugbe Police station for interrogation upon the victim’s complaints.

The matter was later transferred to the Family Unit at the Criminal Investigative Department in Osogbo.

When contacted, the Police Public Relations Officer, Yemisi Opalola, confirmed the arrest of the suspects and added that the duo are in the custody of the Family Unit.