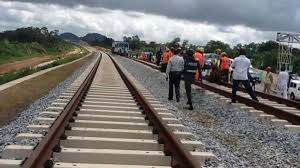 The Minister of Transportation Rotimi Amaechi has educated some critics over the recently awarded Kano-Maradi rail line project, saying that the project has lots of economic potentials to the nation’s economy.

He said the Kano-Maradi rail line will afford the country the opportunity to compete in the area of transporting cargoes, goods and services to and from landlocked neighbouring countries like Niger via the seaports in Lagos, adding that it’s all about economics benefits, not politics.

“Last week, we awarded the contract for Kano to Maradi and people were screaming why are we taking it to Niger Republic. It’s important to take it to Niger because of economic reasons. Most coastal territories in Africa are competing better than us in terms of cargoes coming from not the hinterland, the landlocked countries.

“We decided to join the market and compete so that we can make our seaports very viable. We decided to introduce the Kano-Maradi rail, so that we can convey their goods from Maradi (a boundary village) to our ports with ease. I don’t know why people are screaming about it. It’s about economics, not politics”

“We believe that before the end of the year, two railway projects should commence. Kano-Maradi and Ibadan to Kano. For Ibadan to Kano, we are waiting for approval of the loan in China. Once the loan is approved in China, we’ll commence.

“For Kano-Maradi, the loan is almost ready. They are coming in next week for negotiation. Once we conclude the negotiation and agree, we’ll sign and pursue the construction. The contractor is a Portugese company (Mota-Engil). They have come with a European bank and a German bank to fund the Kano-Maradi rail.

He further explained that the Kano-Maradi railway project will not only generates employment but will serve as a means of curbing insecurity in that region as the criminality and banditry may have been as a result of poverty for some people who go into it.

“You should know that railway generates employment and that as you move from Kano to Maradi you’re going to go to Kano, Dutse, Kazaure, Daura, Katsina, Jibia before you get to Maradi, imagine the number of persons that you’ll create jobs for just at the beginning of the construction. At the end of construction, imagine the number of businesses that you can site along that area just because there is transportation. So when you talk about timing, poverty doesn’t have timing, unemployment is causing insecurity and banditry is a product of poverty, not just lack of education. So you have to find an alternative to those who participate in banditry.

“So what we are trying to create is a source of growing the economy of Nigeria and creating opportunities for those who want to do real business, so they’ll be able to move their manufactured goods and reduce the cost of production around that area. That’s what we are trying to do. So timing won’t be an issue”

Amaechi said, “We are the ones building the rail to their village at the border to attract their cargoes. They are comfortable going to Togo, Benin Republic and Ghana or all those countries around there. So what we want to do is to attract them to a cheap and secure form of transportation, so you can’t therefore ask them to make a contribution. We are going to do the $1.98b at our own cost and at Maradi we stop, so that we can attract their cargoes and then get our seaports to be more competitive as compared to Lome, Benin and Ghana”

He further stated that the country is working towards four new seaports. They are: Lekki, Bonny, Warri and the Ibom deep seaport by the Akwa Ibom State government.

He said, “The first deep seaport in the country will be the Lekki deep seaport and it was under this government that we commenced construction. The next will be Bonny and the third one will be the one in Warri which the President has also approved. The Akwa Ibom state government is trying to do Ibom deep seaport. They are partnering with a foreign company. So if you come to the maritime sector, we’ll be having four new seaports”