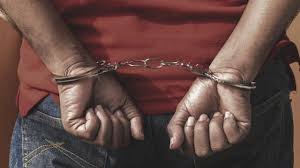 ThankGod Joseph, a tenager from Benue state, has committed patricide after the father accused him of stealing his phone.

The killing happened on 14 September at Ikwokwu-Ito, in Obi Local Government of the state.

According to a complaint filed at the police station, ThankGod hit his father, Igiri following the phone theft accusation.

“Igiri fell down and died on the spot”, the whistle blower, Philip Agbo told the police.

Police charged the 18 year-old with culpable homicide at a Magistrates’ court in Makurdi on Friday. He has been remanded in the correctional centre.

Chief Magistrate Vincent Kor, did not take the plea of Joseph for want of jurisdiction.

Kor ordered the police to return the case file to the Director of Public Prosecution (DPP) for legal advice.

He adjourned the case until Nov. 25, for further mention.

Earlier, the prosecution counsel, ASP Hyacinth Gbakor told the court that the case was transferred from the Divisional Police Headquarters, Obi via a letter dated Sept 21, 2020 to the State CID, Makurdi for proper investigation.