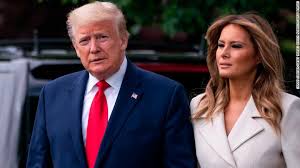 The President of the United States of America Donald Trump and first lady Melania Trump tested positive for coronavirus.

The President announced this very early on Friday morning.

“Tonight, @FLOTUS and I tested positive for COVID-19. We will begin our quarantine and recovery process immediately. We will get through this TOGETHER!” Trump tweeted shortly before 1 am (6 am in Nigeria) Friday.

Trump late Thursday night had said that he and the first lady would begin a quarantine process after top aide Hope Hicks tested positive for the virus.

“Hope Hicks, who has been working so hard without even taking a small break, has just tested positive for Covid 19. Terrible! The First Lady and I are waiting for our test results. In the meantime, we will begin our quarantine process!” Trump tweeted Thursday night.

His message made it clear he was ready to go into isolation even before he received the test result.

Hicks, who has been known to spend a lot of time with Trump, had traveled with the president to the debate Tuesday night in Cleveland. She was seen not wearing a mask.

Hicks was also seen boarding Marine One, along with several other of the President’s closest aides — Jared Kushner, Dan Scavino and Nicholas Luna — none of whom wore masks, on Wednesday as Trump was heading to a campaign rally in Minnesota.

“She did test positive, I just heard about this. She tested positive. She’s a hard worker. Lot of masks, she wears masks a lot but she tested positive. Then I just went out with a test. I’ll see — you know because we spent a lot of time — and the first lady just went out with a test also. So whether we quarantine or whether we have it, I don’t know.

“I just went for a test and we’ll see what happens, I mean, who knows. … I spent a lot of time with Hope and so does the first lady, and she’s tremendous,” Trump said on Thursday night during a call-in appearance on Fox News’ “Hannity.

However, it is unclear what President Trump’s “quarantine process” will look like.

The US Centers for Disease Control and Prevention guidelines state that a 14-day quarantine should take place after the last known exposure to someone who has tested positive for Covid-19 but Mr. Trump can sometimes follow his own rules.

Trump’s schedules for Friday include meetings, a roundtable with supporters, and an evening campaign rally in Florida.

However, the White House is yet to comment on whether Trump’s quarantine would result in events being canceled or will be done virtually.