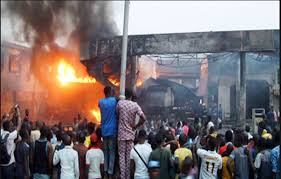 One Mrs Chika Obetta of Jikwoyi area in the Federal Capital Territory, FCT Abuja was lost her life in a fire accident during the week.

Obetta, the kerosine seller, was caught in the tragedy when a tanker supplied kerosine to her shop, opposite phase 2 market, Jikwoyi.

According to an eye witness, Mr Samson, the fire started as a result of a spark from her generator while the kerosine was being delivered and it set the fire off.

“She was in her shop when the fire started. The fire engulfed the shop, thus preventing her from getting out. A neighbour did all he could to rescue her but she was badly burnt by the time he pulled her out of the shop.”, he said.

According to another witness, who prefers to remain anonymous said she was quickly rushed to the hospital in Jikwoyi Area, but was advised to be taken to National hospital, Central Business District Area in the territory where she was pronounced dead.

It was gathered that the Nigerian fire service was alerted and they arrived the scene and doused the fire, preventing it from spreading further.

Mrs Obetta left her 2 children and husband behind. He has been describe as an easy-going, kind-hearted and gentle woman who was friendly to everyone.