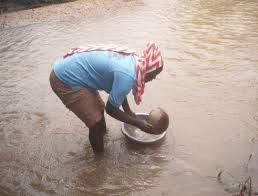 Over a century ago, scarcity of water has been the major challenge of Ijabisa community in Bwari Area Council in the Federal Capital Territory, FCT.

The sources of water for the community are streams flowing through valleys and the water, according to the people is unhealthy for human consumption.

Because of the distance from their home to the stream, the women in the community have to wake up before cockcrow, treck for some kilomters to fetch water for their daily use.

Looking at the suffering of the women, men of the area are worried about the scarcity, not because they are the ones burdened with the responsibility of fetching water, but because their wives who engaged in fetching the water have become tired, abandoning their marriages and returning to their fathers’ houses.

The chief of the community, Mr. Dauda Husseini, testified that his wife could not handle the rigorous stress of fetching water every day, one day, she packed her things and went back to her father’s house.

According to him, “If I hadn’t been following this one that I am married to, bumper-to-bumper, she would have gone too. I will not blame her because, who wants to suffer?”

“I have tried to get some loans so that we could dig a borehole here. I was told that I would need over N600,000 for the job. The topography of this area is such that you would have to dig very deep before you can get water. The wells we dig always dry up. It is a big challenge for us.” he said.

He asserted that the consumption of the brown water has made his people constantly sick with diarrhoea, cholera and typhoid.

“As I am talking to you, my mother is on drip. Three of my children are sick. One of them, after being treated here, was referred to a hospital in Kaduna State. Many of the people in my community complain of this same thing. We are really in a difficult situation.”

Another native of the community, Mohammed Sani Musa, explained how the first girl he wanted to marry from Jabi refused to marry him because of lack of water in the community.

Musa said he ends up marrying a girl from the neighbouring community, saying that rejection would forever be a constant reminder of what his community’s lack of water has cost him.

He added that the increase in population and climate change make the situation worse during the dry season when streams dried up, a situation which compel people to go farther streams in search of water.

“Those with energy and patience could trek to Zhiko, a neighbouring community, to get drinking water from the borehole donated to them by a non-governmental organisation. The borehole being powered by solar energy is being overused, owing to the huge population that depends on it for water.”he stated.