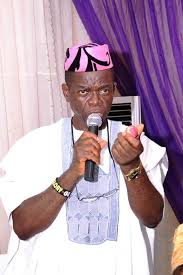 National Secretary, Academic Staff Union for Research Institutions, ASURI, Dr. Theophilus Ndubuaku, has said that by creation, Nigeria was created by God to be the richest country in the world.

Ndubuaku stated that virtually everything God has created, he put some of it in Nigeria in large quantity and in good quality, saying that diversifying these natural resources have become the major challenge.

The National Secretary of ASURI, while speaking to our correspondent in an interview in Abuja, said that despite all these natural resources deposited in Nigeria, the economy has nothing to write home about.

He expressed worries that countries like China, Korea, India among others which were far behind Nigeria in the 70s are now above Nigeria economically and as well in the area of infrastructural development.

According to him, “People like Donald Trump and other leaders in the world, when they heard about Nigeria, they began to wonder what is really wrong with this country”

“Remember in the 70s, we were ahead of these countries, such as India, China, Korea among others. Indians were coming to Nigeria to take teaching jobs, even menial jobs. You will agree with me that at independent, our currency was stronger than dollar, even pound sterling because of our economy then.

“The economy was mainly agrarian and it was strong because of diversity and the inpact of the quality and quantity of resources available were felt. We have everything in this country.

“God does not make mistake for creating this country to be the richest country in the world, but Nigeria is now the poverty capital of the whole world” he said.

He asserted that a situation where financial institutions in the country is charging 30% interest on loans do not encourage production and economic development of this country.

He said, “You will be surprised to hear that interest rate charge on loan in abroad is 3.5% and here in Nigeria, when you go to the bank to borrow money, they tell you 30%. Don’t you think something is wrong?

“This government can go out and borrow money at 2.5% interest rate, payable in 25 years and yet the banks are lending money to Nigerians at 30% interest rate”

Ndubuaku, however advised government to govern well so as to address these issues of bad economy and as well encourage production if Nigeria must grow.