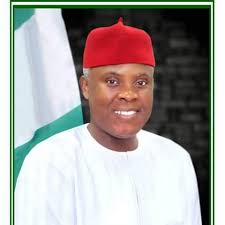 The pronouncement was made during the welcome speech by Speaker of the House, Mr. Femi Gbajabiamila, upon the resumption of members of the green chamber from its annual recess on Tuesday.

Mr. Gbajabiamila noted that the development followed the commitment of the lower chamber of the national Assembly in following the Legislative Agenda, as it serves as an agreement document between its members and Nigerians.
“Hon. Henry Nwawuba has worked closely with me to conceptualise and develop the Legislative Agenda, and Implementation Framework and will serve as Chairman of the Committee while other members will be announced subsequently,” he said.

In his explanation, the speaker said the house had prior to its recess, presented to the Nigerian people, the updated Legislative Agenda of the House, tagged, ‘Our Contract with Nigerians.’

According to him, “The updated Legislative Agenda of the House and the accompanying Implementation Framework, are a significant and thorough effort to outline a set of priority actions that taken together, will help us achieve a more peaceful and more prosperous nation.”

He also noted that the Legislative Agenda was updated, so as to meet up with current challenges poised by the Covid-19 pandemic, which has greatly affected countries of the world.

“We updated our Agenda to help us respond more effectively to the unique and far-reaching effects of the Covid-19 pandemic on our economy, on our national security and the general well-being of all our people.

“We must each always remember that this document is a contract with the people who sent us here and as such, our readiness and determination to keep our end of this bargain must never be in doubt. The time has now come for us to make good on our obligations,” he noted.

The speaker further said going ahead, bills and motions captured in the Legislative Agenda, will be given utmost priority and expeditious attention.

“To do that within the time frame we have committed to in the Implementation Framework, requires that we change the way we operate.

“From now on, motions and proposed bills that speak to the priorities set out in the Legislative Agenda will receive precedence in the House. The only exceptions will be for emergencies and matters of urgent national importance that require immediate action.

“Honourable colleagues, I enjoin you to continue, as a matter of course, to acquaint yourselves with the provisions of the Legislative Agenda and the Implementation Framework, as these are documents to which we will often return during our time here.

“To ensure fidelity to the commitments we have freely made, I am appointing an Adhoc Committee to guide implementation of the Legislative Agenda across the Committees and other institutions of the House of Representatives,” he added.

He then reiterated that the Ad-Hoc Committee, will work with the Committee on Rules and Business to ensure that bills brought forward for consideration align with the House’s Agenda.

In addition, he stated that the Committee will monitor and provide regular reports on our individual and collective efforts to deliver on the objectives set out in the Agenda.

On its inauguration in 2019, the 9th House of Representatives on inauguration had pled to develop a blue print called the Legislative Agenda, which would guide the House in it operations with the Nigeria populace, and lived up to its standard as it announced a Legislative Agenda drafting Committee headed by Julius Ihobovere of the All Progressives Congress, APC, from Edo state.