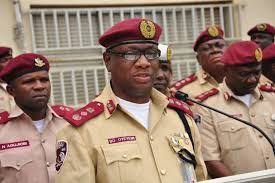 Corps Marshal of the Federal Road Safety Corps, FRSC, Dr Boboye Oyeyemi, has congratulated Nigeria and all Nigerians as they marks the 60th independence anniversary on October 1st, 2020.

Oyeyemi, while praying for continuous prosperity of the country, enjoined everyone to observe the holiday with sober reflections, adding that peaceful and safe celebration should be the uppermost in the minds of all Nigerians.

In an independence anniversary message issued by the Corps Public Education Officer, FRSC, Bisi Kazeem, the Corp Marshal lauded the founding fathers of the nation for their vision, patriotism and commitment to building a virile, peaceful and prosperous nation that could serve the socio -economic and security needs of all citizens.

Oyeyemi congratulated President Muhammadu Buhari, for successfully piloting the affairs of the nation to her 60th independence anniversary and assured all Nigerians that FRSC will remain committed to improved service delivery in matters of road safety management and traffic administration in the country.

The FRSC boss enjoined all Nigerians to always exhibit the spirits of patriotic and remain sensitive to the national demands for peace, security and development as being put in place by the Federal Government to address the challenges of nation building.

He reiterated the determination of the FRSC to supporting the Federal Government and all relevant stakeholders to achieve the much desired success in nation building, especially in the areas of constructing more durable roads, railway lines and other modes of transportation necessary for achieving the social and economic targets of the administration.

The Corps Marshal further expressed concerns over the noticeable increases in certain traffic infractions being committed by some drivers across the country.

These include speeding, route violation, overloading and traffic light violation, saying the identified offences constitute the major factors responsible for the fatal crashes that have been recorded in the country.

“Recently, we recorded increasing cases of fatal crashes involving tankers in parts of the country with enormous human and economic loses. And like every Nigerian, we in the FRSC are pained by the great loses from the infernos, and therefore, putting in place appropriate measures that could avert the menace in the future,” the Corps Marshal stated.

“Accordingly, we are stepping up our collaborations with relevant stakeholders in tanker and petroleum transportation sector across the country and creating more aggressive public awareness on issues of minimum safety standards among petroleum tank operators,” he added.

Kazeem disclosed that as part of the proactive measures being put in place by the FRSC towards ensuring peaceful and safe independence celebration, adequate numbers of personnel and logistics have been mobilised for a special patrol aimed at effectively managing human and vehicular traffic during the period.

He however, appealed to all Nigerians to support the campaign by promptly reporting cases of emergency either to the FRSC toll-free line: 122 or the studio of the National Traffic Radio through telephone lines: 08052998090 or 09067000015 respectively.