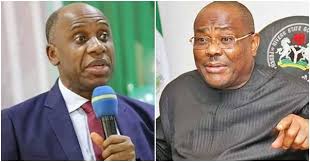 The Rivers state Governor, Nyesom Wike has said he is ready to resign from office if Rotimi Amaechi, the Minister of Transportation can mention his contributions to the state in his ministerial capacity.

The Governor, who faulted criticisms from the Minister of Transportation, Hon. Rotimi Amaechi, over governance in Rivers State, urged Amaechi to mention his contributions to the state since he became the minister.

Wike also disagreed with claims that judges and the judiciary have lost their voices in Rivers.

According to The Cable, Wike made the statement on Monday, September 28 during an interview on AIT.

The governor’s statement was in reaction to Amaechi’s claim that he (Amaechi) is one of the best governors the state has ever had.

Amaechi was credited to have made the statement on Sunday, September 27, at the funeral of Adolphus Karibi-Whyte, a former justice of the Supreme Court.

The minister had complained of rising insecurity, bad roads and intimidation of the judiciary in Rivers State.

But in his reply, Wike said he brought a lot of development to Rivers when he served as minister of state for education, while Amaechi cannot boast of any achievement.

The governor also dismissed claims by Amaechi that judges and judiciary have lost their voices in the state, The Sun reported.

He alleged that the minister shut down courts for two years when he was governor.