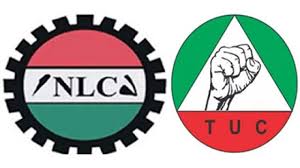 Human Rights Writers Association of Nigeria, HURIWA, has accused organised labour of betraying the trust of the Nigerians masses by suspending the planned strike slated to take place yesterday.

Reacting to the sudden call-off of the planned national strike by the trade union, HURIWA, further accused the organised trade unions of deceiving Nigerians, saying that the union’s agitation does not capture the aspirations of the commoners.

According to HURIWA, “The idea that the organised labour told Nigerians that the intentions for the now suspended but never intended strike was to defend the interests of the oppressed masses but will in the wee hours of the night sneaked into the presidential mansion to strike an unholy accord with the Nigeria Federal Government, is the height of betrayal similar to the depravity of judas Iscariot in the New Testament of the Holy Scriptures”

The civil rights advocacy group- Human, has urged the Nigerian masses to fight for their rights as regards the excruciating hardships and hard times already inflicted by the hike in pump price of fuel and electricity tariff, asserting that the organised labour unions represent only the interest of paid workers in Nigeria who are less than nineteen percent of the population of Nigeria.

“ Since assuming offices as leaders of NLC/TUC, these hierarchies of the few Nigerians in paid employment will always deceive the masses that their agitations capture the aspirations of commoners.

“These union leaders together with Government, in the night usually strikes anti-masses’ deals which in essence neglects the core issues of the agitations of the masses for a reversal of importantly, fuel price and also the electricity tariff. This show of grand deception and deceit is a manifestation of the indisputable fact that the labour unions played a fast one on millions of Nigerians who had wrongly hinged their hopes on these labour leaders.

“This call-off of the protest is the grandmother of all betrayals, and this should be a warning sign for the ordinary people of Nigeria including the over 60 million unemployed youths to take their destiny in their hands and protest the injustices of government or perish as slaves” HURIWA stated,

HURIWA insisted that from data made available by the international labour organisation, Wage and salaried workers in Nigeria was 18.71 percent as of 2019, adding that its highest value over the past 28 years was 18.85 in 2010, while its lowest value was 14.93 in 1991.

It said, “The global body defined wage and salaried workers (employees) as those workers who hold the type of jobs defined as “paid employment jobs,” where the incumbents hold explicit (written or oral) or implicit employment contracts that give them a basic remuneration that is not directly dependent upon the revenue of the unit for which they work.”