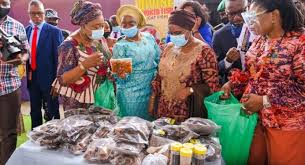 Dangote Cement Plc said 171 millionaires across the nation have emerged in its ongoing ‘Bag of Goodies Promo season 2’.

He charged the winners not to relent but invest the prize wisely to yield more benefits in the future for them.

The Dangote Regional Director stated the company’s readiness to give out one billion naira to 1000 customers.

He noted that other prices to be won included refrigerators, tricycles, recharge cards and television sets.

Also, Regional Director, Lagos/Ogun, Tunde Mabogunje, at the prize giving ceremony in Ikeja, commended the winners for their loyalty and continuous use of Dangote Cement in their projects.

He said the company was making progress because of consumers who formed the end chain in the distribution of any product.

“Without consumers, no product will become a success,” he said.

Mr Bankole George, Regional Director, South East, addressing the winners at the event held at the regional office in Enugu, tasked them to buy more of Dangote Cement to improve their chances of winning.

He urged the purchase of Dangote cement in the completion of building projects by taking advantage of the timing of the current promo in a win-win situation.

“Whoever completes his projects this period and still wins one millionaire naira in the promo has won on two fronts,” he said.

In her remarks, Director of Marketing, Dangote Cement, Mrs Funmi Sanni, said the promo came at an appropriate time to cushion the effects and impact of COVID-19 on businesses and families.

Sanni said the company had been making efforts to satisfy its teeming customers to the fullest.

She added that apart from the premium quality of the product, the firm has also introduced several customer-driven promotional offers in order to keep their relationship intact.

According to her, a customer could only win the N1 million cash prize on collection of the scratch cards that each carried letter D, A, N, G, O, T and E to make up the name DANGOTE.

Chief Commercial Officer, Dangote Group, Mr Rabiu Umar, in his remarks, said following the negative impact of COVID-19 on the economy, Dangote Cement decided to award total of N1 billion to 1,000 winners across the country.

According to him, the company deemed it fit to continue with the second phase of the promo, tagged Bag of Goodies 2 in order to give back to the society to cushion the effects of the pandemic.

Umar noted that the promo was like palliative to the teeming customers in the wake of the pandemic as most of them had suffered economic hardship caused by the coronavirus.