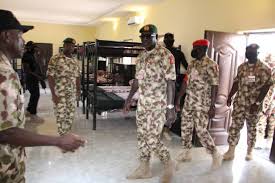 The Chief of Army Staff, Lt. Gen. Tukur Buratai was in another part of the state inspecting an army super camp about the time Boko Haram terrorists were killing 11 security men in an ambush near Baga in Borno state.

He visited the Army Special Super Camp Chabbal in Konduga Local Government Area of Borno State on Friday the 25th of September 2020.

While at the camp, he addressed officers and men, after which he had durbar with troops where operational, logistical and administrative issues were discussed.

On Thursday, the 24th of September 2020, he was represented at the Army Super Camp Ngamdu where he inspected the construction and renovation works as well as facilities at the camp.

In the team that visited the Super Camp Ngamdu, were the Chief of Training and Operations Army, in company of the Commander Engineer Corps and Theatre Commander Operation LAFIYA DOLE Major Generals NE Angbazo, JS Malu and F Yahaya among other senior army officers.

Gen Buratai applauded the troops for their resilience, patriotism and commitment in the war on terror in Nigeria. He directed them to be more courageous and bold to end the war.

He said, “The whole country is hopeful that you should achieve results, you must bring this war to an end very soon”.

“You are better trained, equipped and motivated to do the nation proud, and so you must be more courageous and bold to end terrorism in Nigeria”.

Encouraging the troops further, he reiterated, ” The Nigerian Army is not in the North East Theatre of Operation for Crowd Dispersal or Peace keeping Mission. We are here for war and so you must be perpetually in war mode if you want to succeed”.

In a related development, the Chief of Army Staff also commissioned a 40 bed capacity accommodation for soldiers on escorts and guards duty at the Flag Staff House Annex in Maiduguri.