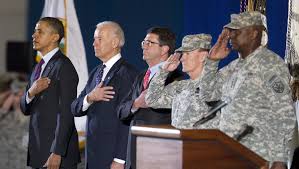 The officials, some of whom served America under Trump made the endorsement in an open letter, published today.

In the letter, they argued Trump has demonstrated that he is “not equal to the enormous responsibilities of his office’’.

They also also say that Biden has “the experience and wisdom necessary to navigate America through a painful time’’.

“We are former public servants who have devoted our careers, and in many cases risked our lives, for the U.S.

“We are Republicans, Democrats and Independents.

“We love our country; unfortunately, we also fear for it.’’

Among the signatories was one of Trump’s most senior military advisers, Rtd. Gen. Paul Selva, who served as vice chairman of the Joint Chiefs of Staff until July 2019.

The letter was released the month after a controversial article in the U.S. magazine, ‘The Atlantic’ claimed that Trump had called Americans who died in wars “losers” and “suckers”.

Trump has denied the report and said that he supports U.S. service members. (dpa/NAN)