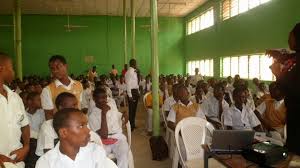 Akwa Ibom State Government has announced the reopening of both primary and secondary schools in the state.

The reopening, however came with staggered schedules for schools, with students being in their classrooms for three days in a week.

According to the Secretary to State Government and Chairman, COVID-19 Management Committee, Dr. Emmanuel Ekuwem, secondary schools will reopen on September 28, while primary schools resume on Monday, October 5, 2020.

The Federal Government shut down all schools in the country in March because of the COVID-19 outbreak.

The SSG said the move is aimed at preventing overcrowding in classrooms to prevent students from contracting coronavirus.

He said: “Primary six students resumed classes on September 21, while primary one to five students is to resume on October 5 and end on November 14.

SSS 1 students will resume on September 28 and proceed on holiday from November 6 to 15.

Ekuwem said although COVID-19 cases had reduced in the state, parents must provide face masks for their children.

Meanwhile, Governor Udom Emmanuel has told residents to continue to observe all COVID-19 protocols to contain the pandemic.

In a statewide broadcast as part of the activities to mark the 33rd anniversary of the state, Emmanuel also cautioned politicians in the state not to make false allegations against their opponents.

The governor said his administration would not accept political tension ahead of the 2023 governorship poll.

He promised to attract more investors, saying through his administration’s efforts over 18 industries had been located in the state.

He said his administration’s move to diversify the economy had yielded results in the area of agriculture.

The governor, who was represented by the Commissioner for Information and Strategy, Ini Ememobong, at the third Oil Palm Submit in Ikot Ekpene, yesterday said, the improved seedling system has over the years proved its efficiency in palm oil yield.

In another event, Emmanuel urged traditional rulers to ensure peace and progress in the state.

He made the appeal during the inauguration of the ultra-modern Chambers of the Akwa Ibom State Council of Chiefs in Uyo.

He said the edifice was constructed by his administration because of its regard for the traditional institution.

The supervisor of the project and executive Chairman, Uyo Capital City Development Authority, Prince Enobong Uwah, said the building was conceptualised with the aim of protecting the cultural heritage and pride of Akwa Ibom people.