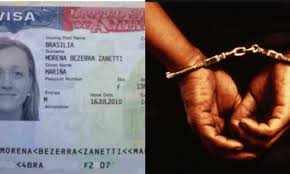 Odujole, whose address was not stated in court, is facing a two-count charge of obtaining money under false pretence and fraud.

Adaraloye said that defendant collected N2.4 million from the complainant, Micheal Opaleye, to assist him to procure America visa, which she did not carry out.

“The defendant converted the money to personal use instead of fulfilling the agreement between them,” he said.

Adaraloye said that the offences contravened Sections 419 and 516 of the Criminal Code Cap 38, Law of Federation 2004.

Odujole pleaded not guilty to the charge.

The Magistrate, Mrs A.O. Adeyemi, admitted Odujole to bail in the sum of N500,000 with two sureties in like sum.

Adeyemi said that the sureties must reside within the court’s jurisdiction and be gainfully employed with evidence of tax payment to Ogun Government.

The case was adjourned till 30 Sept. for hearing.