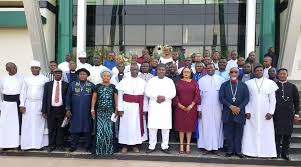 Christian Association of Nigeria, CAN, Enugu State chapter, has applauded Governor Ifeanyi Ugwuanyi for the respect he has continued to accord the Church in the state as well as his untiring efforts at entrenching peace, good governance and security of lives and property.

The umbrella body of the Christians also lauded Ugwuanyi for promoting love and unity “among adherents of different religious beliefs in Enugu State without discrimination”.

Speaking when the newly elected and appointed leaders of CAN in Enugu State paid a maiden courtesy visit to Ugwuanyi, at the Government House, Enugu, alongside the five bloc leaders, youth and women leaders, the new CAN Chairman, Rev. Emmanuel Edeh, noted that the governor’s resolve in demonstrating that Enugu State is in the hands of God has no limitation.

Rev Edeh, described Governor Ugwuanyi as “a peace loving governor”, stating that, “Enugu State is one of the most peaceful states in Nigeria today. We have come to assure you that CAN Enugu State under the new leadership shall continue to work harmoniously with you”

He disclosed that “Enugu State CAN has been known for peaceful relationship with you and the state”, adding that “our predecessors have worked peacefully with you and handed-over the peace to us”.

Edeh assured the governor that “we shall not fail rather we shall improve” and “we shall, as always, be partners in moving Enugu State forward”.

The new leadership of the Christian body reassured the governor of their unalloyed duty to continue to support his administration with prayers and inform their members to contribute in any Godly manner that can promote peace and good governance in the state.

According to the new CAN Chairman, “We are beneficiaries of your dogged efforts in investing in human and material resources in securing lives and property in Enugu State. Enugu State is one of the most peaceful states in Nigeria today”

“Sir, you worked with our predecessors and have assisted CAN Enugu State so immensely. You made us proud when you hosted us and honoured our former CAN Chairman, Rt. Rev. Christian C. Obiefuna, during his retirement ceremony as a Bishop.

“Virtually all our programmes that came to your knowledge, you have never relented in supporting us. You have also involved us in most of your programmes including supporting some of the ministries and churches”.