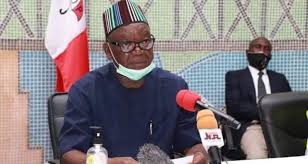 Governor Samuel Ortom of Benue state has disclosed that the general impression among the repentant youths who willingly surrendered to be granted amnesty by the government was that they were betrayed after the killing of the wanted militia leader, Terwase Agwaza, popularly referred to as Gana.

The Governor spoke at Government House Makurdi yesterday at the end of an expanded State Security Council meeting which also had in attendance political, traditional, religious and community leaders from the Sankera axis of the state comprising, Logo, Ukum and Katsina-Ala Local Government Areas, of the state.

He disclosed that the meeting resolved that security agencies and the military beef up security in the state especially at the border communities following apprehension by the people of possible attacks on the communities.

Governor Ortom assured that the government would continue to interface with the military stressing, “we are looking unto the security agencies including the military to ensure that they take positions in the communities that will give confidence to the people and also protect lives and property of the people.

“The Security Council would continue with its confidence building among the people and even the repentant criminals because they feel that they have been betrayed.

“That is what is trending now, that they have been betrayed, but we want to assure them that there was nothing like that.

“That was why we went ahead to profile the 42 that were brought to Makurdi and also extended our hands to others that are willing to turn a new leaf.”

He commended the people for remaining calm despite the mounting tension after the news of the killing of ‘Gana’ filtered into the town and appealed to them not to loss faith in the government, the political class, the clergy and the traditional rulers who were involved in ensuring the surrender of ‘Gana’ and the return of peace in the area.

The Governor urged the military to release without further delay all the youths whisked way with the late militia leader and vehicles some of which were official vehicles of the government.