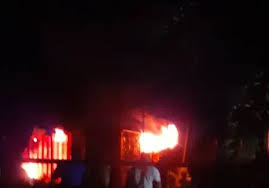 Independent National Electoral Commission, INEC has explained how the commission would replace the 5,141 card readers that were destroyed by fire at the commission’s head office in Akure, Ondo State capital, on Thursday.

In a telephone interview with newsmen, INEC spokesman on Voter Education, Festus Okoye on Friday said, the incident would not affect the October 10 governorship election.

Fire gutted the container that contained smart card readers around 7:30 p.m. at the commission’s office in Akure.

While Mr. Okoye who is in Ondo State alongside other staff, arrived at the scene early enough, the office of the fire service close to the INEC headquarters could not help due to lack of water to put out the inferno early enough, this newspaper reported earlier.

The INEC spokesperson who had earlier confirmed to our correspondent that 5,141 card readers were burnt, later explained how they will be replaced before October 10.

“The burnt card readers cannot affect the election, as 4,141 belong to the Ondo State INEC office while the remaining 1,000 were brought from Osun,” he said.

Meanwhile, People Democratic Party in Ondo state said it suspected foul on the mystery fire that gutted the Ondo State headquarters of the Independent National Electoral Commission , INEC, in Akure.

The party in a statement by its publicity secretary, Mr. Kennedy Peretei, said it received with disappointment, the news that the fire that gutted the state INEC headquarters Thursday night consumed a container bearing over 5000 card reader machines.

The party queried, “Is INEC saying it does not have an internal mechanism to curtail fire outbreak in her office?

“Is the metal container bearing the over 5000 card reader machines connected to electricity?

“If so, was the electricity supply not put off after the official close of work at 05.00pm?

“Where were the security officers on duty at the time the fire started and why was it that fire engulfed a container housing over 5000 card reader machines within few minutes?”

It warned that the people of the state should not be taken for granted by INEC by resorting to the use of manual device, as against the use of electronic card readers on election day.

The major opposition party said, “Indeed, we suspect collusion between some unscrupulous officials of the commission with some politicians to perfect the running plans to rig the October 10 governorship election.

“We do not want any politician, because of selfish political ambition, to take us back to the dark days of the 1983 political crisis that engulfed the old Ondo State.

“We are thus appealing to eminent Nigerians, the civil rights community and other international bodies to wade in and help prevent any move to subvert the will of the people in the coming Ondo governorship election,” the PDP urged.

Also, the Eyitayo Jegede Campaign Organisation, EJCO said, “We cannot rule out a foul play in the mystery fire that completely razed down the state INEC office; now, our fate is in the hands of God.

A statement by the Head, Media Research for the organisation, Samuel Fasua, said, “For a while now, our main rival in this race has been in the eye of the storm over accusation that it was using loan assistance decoy to collect the pin codes in the Permanent Voter Cards, PVC of drivers, artisans and other professionals across the state.

“Telephone SMS was sent to them through the Ondo State Entrepreneurship Agency, that they should submit the code numbers on their PVCs latest September 2, 2020; that the state government wanted to grant them loans to boost their businesses,” he said.