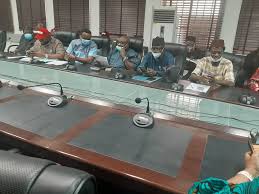 Following the 15 day-ultimatum given by Joint Health Sector Unions and Assembly of Health Care Professionals, JOHESU to commence an industrial action by midnight of Sunday September 13th, 2020, the Minister of Labour& Employment, Dr Chris Ngige, convened a conciliation meeting on Thursday 10th September, 2020 with the Unions’ leadership and relevant Government stakeholders to address outstanding issues and avert the strike.

Minister stated during the meeting that ”N126 billion has been appropriated in the 2020 COVID-19 Intervention Appropriation Act for infrastructure upgrading and equipment for the Health Sector during the period but lack of effective communication has made it impossible for the Unions, JOHESU to appreciate the degree of investments made in the Health Sector.”

In a report read by the Minister at the end of the meeting, it was agreed that “the Unions be carried along in the affairs of the Presidential Task Force, PTF on COVID-19 to ensure proper communication”; and Private Sector engagement encouraged to add value to the Health Sector investment generally.

On the omission and shortfall in payment of the Special COVID-19 Hazard and Inducement Allowance, the meeting agreed that the Federal Ministry of Health should, by Friday, 11th September, 2020, issue a Circular to the Chief Medical Directors, CMDs to forward the list of affected members to the Health Ministry by Monday 14th of September, 2020 to facilitate payment.

In addition, JOHESU was asked to mobilise their members in the local chapters to ensure the CMDs comply with the Circular.

Ngige said he would consult with the relevant Ministers on how to address the matter of medical personnel in the Education sector not captured in the first tranche of payment, as clinics/hospitals under Federal Ministries of Education, Justice &Defence were equally affected.

On the request by JOHESU that all Health workers, non-core medical professionals inclusive, should be beneficiaries of the 50% of their consolidated basic salary as Special COVID-19 Hazard and Inducement allowance, the meeting asked the Office of the Accountant-General of the Federation to see whether it could accomodate the request within the available funds because certain groups were not in the original classification for that category of benefit.

The meeting noted that the matter of “Adjustment of Consolidated Health Salary Structure, CONHESS as was done with Consolidated Medical Salary Structure, CONMESS since 2014” had earlier been referred to the National Industrial Court of Nigeria, NICN, and therefore advised JOHESU to either withdraw the case from NICN so the Ministry of Labour could resume conciliation on it, or open up discussion with the Federal Ministry of Health later.

On “Withheld April and May, 2018 Salary of JOHESU members”, the meeting stated that the action was taken on the authority of “Section 43 of the Trade Disputes Act Cap T8 of the Laws of the Federation of Nigeria, LFN, 2004, to deter workers categorised as essential services from embarking on strike.”

The meeting noted that the issue was a substrata of the case before the NICN, and therefore illegal for JOHESU to use it as a basis for embarking on a strike.

The meeting also directed the Federal Ministry of Health to commence the implementation of those issues that were adopted as consent judgement at the NICN, and report back in four weeks, viz: Internship Training; Ascertaining the veracity of JOHESU’s claim of understaffing and irregular employment; Headship of Department.

In view of the understanding reached, JOHESU would consult with her members with a view to reporting back on Saturday, 12 September, while the meeting was adjourned to 15th of October, 2020 to enable Federal Ministry of Health carry out its assignments.