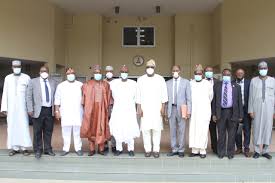 The Nigeria Federal Capital Teritory, FCT Administration has been commended for its efforts in the reduction of maternal mortality rate in the territory, through the implementation of the Maternal and Perinatal Death Surveillance and Response, MPDSR project of the Society of Gynaecology and Obstetrics of Nigeria SOGON.

This commendation was made by the President of SOGON, Prof. Oluwarotimi Akinola when a delegation of Executive members of the Society paid a courtesy visit to the FCTA on Thursday, 10th of September in Abuja.

He revealed that the Society introduced the MPDSR in 6 health facilities in the FCT, namely Nyanya , Bwari and Kwali General Hospitals and the Primary Healthcare centers at Kwali, Gbadalape and Kogo, adding that the implementation of the MPDSR project in these areas has reduced the maternal mortality ratio in the territory to below the national average.

Professor Akinola also commended the FCTA for the establishment of a budget line for the MPDSR programmes in the FCT, adding that the FCT was the first state in the country to do so.

Continuing, he said that the MPDSR project in the FCT has increased consciousness and accountability of health workers as the hospital and Primary Health Care staff have become more conscious on issues relating to maternal and perinatal deaths.

While thanking his guests for the commendation, the FCT Minister, Malam Muhammad Musa Bello, reiterated the commitment of the FCT Administration to the development of Primary healthcare centers in the FCT.

He informed them that in furtherance of efforts to improve services at the primary Health care level, the FCTA recently employed 203 volunteer midwives and Community Health Extension workers and called on the Society to work very closely with the Health and Human Services Secretariat of the FCTA and the Office of the Hon. Minister of State for the continual provision of maternal healthcare services to the women of the FCT.

The FCT Minister also appealed to medical doctors not to embark on strike actions, especially as the world is fighting the COVID-19 pandemic, adding that those most affected by industrial actions are the more vulnerable members of the society including women requiring maternal care.

Also speaking, the Chairman, House Committee on Health Hon (Dr) Tanko Sununu had commended the FCT Administration for the construction of the road leading to the offices of the Medical and Dental Council of Nigeria and the National Center for Disease Control, NCDC.

Present at the meeting were the Permanent Secretary, FCTA Mr Olusade Adesola, the Deputy Chairman of the House Committee on Health, Dr Samuel Adejare, the Chief of Staff to the FCT Minister, Malam Bashir Mai-Bornu, the Ag Secretary of the Health and Human Services Secretariat, FCTA, Dr Muhammed Kawu and other Executive Committee members of SOGON and senior staff of the FCT Administration.