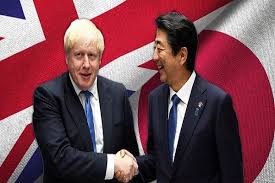 Uinted Kingdom and japan have signed a post- Brexit trade deal, the first of its kind, with signs that similar agreements with European union countries may meet a brick wall; following their refusal to support Brexit.

The agreement according reports monitored online yesterday indicate that there, will be increase in commerce activities with the Asian Country to the tune of 15 billion pounds ($19 billion) .

Acknowledging the new business initiative, Britain’s international trade secretary, Liz Truss, said, “The agreement we have negotiated is in record time and in challenging circumstances , it will go far beyond the existing EU deal, as it secures new wins for British businesses in our great manufacturing, food and drink, and tech industries,”

The government said U.K. businesses would benefit from tariff-free trade on 99% of exports to Japan and that it would give British businesses a gateway to the Asia-Pacific region.