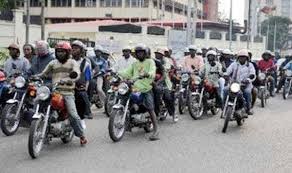 Concerned motorists in Lugbe, a suburb of the Federal Capital Territory, FCT, Abuja have called on the FCT Administration and the Federal Government to ban motorcycle operators, popularly known as ‘Okada’ from plying Airport road.

While expressing their grievances over the activities of the okada operators that have taken over every bus stop along the axis, motorists have complained that the way they struggle for passengers on the main road was capable of causing fatal accident.

They urged the governments to urgently address the issue by way of restricting them from coming to the main road to pick passengers, adding that those who need their service should go to where they will be restricted to.

One of the motorists, Mr. Dauda Suleiman, who spoke to our correspondent yesterday, said that two okada riders were knocked down last week at the Federal Housing bus stop as they were scrambling for passengers.

According to him, “In most cases, they don’t even allow commuters to alight from the vehicle before they block the road. When you try to correct them, they pick offence and even want to fight you.”

“In the morning when people are going to work and at the close of work, these people always cause unnecessary gridlock at Federal Housing, Car Wash and Berger bus stops, making life difficult for motorists and commuters.

“It is a pity we find ourselves in this situation. Airport road in a nation’s capital, which supposed to be free for people coming in and going out of the country, has become another thing entirely.

“Government should do something to stop this untidiness. It has not been like this before. Agencies responsible should seat up to ensure there is free flow of traffic on this axis” he said.

Mr. Mark, who said he plies the Airport road on a daily basis, said that he was disappointed over the inability of the government to control this set people.

He asserted that urgent action should be taken by Government to ensure motorcycle riders do not operate on the main road, adding that they have overpowered the Abuja Environmental Protection Agency, AEPA, who only end up in chasing them for a while and they will return again.

Residents also expressed worries over ways touts popularly known as “Agburos”, have taken the law into their hands as they wrestle steering with motorists, causing serious gridlock on the expressway especially in the morning and at close of work in the evening.

According to them, “These criminals attack motorists who stop to pick and drop people at FHA, Car Wash, and Berger Bus stops, all along Airport road.

One of the residents, Mr. Agi Agabi, who spoke to our correspondent at Car Wash Bus stop, Lugbe, accused the “Agburos” of extorting N5, 000 and above from their victims, adding that most commercial and private drivers are scared of stopping to pick and drop passengers at these bus stops.

Agabi revealed that recently, a young woman with a 5 years old girl were knocked down while alighting from a vehicle that conveyed them from Kuje Area Council to car wash bus stop at Lugbe due to the activity of these criminals.

He explained that the driver of the vehicle was trying to escape from the “Agburos” who constituted themselves as taskforce, saying that it was in that process that the woman and her child fell off and died while the driver escaped.

“These ‘Agberos’ don’t even care to know whether you want to drop your brother or sister, once they sighted you dropping anybody, they rush to take over the vehicle. And for the fact that they are many, you cannot withstand them” he stated.

Another resident, Mohammed Alkali, who also spoke on the issue, accused policemen of collaborating with the ‘Agberos’ who are involved in the illegal deal.
Alkali stated that with the help of policemen on their side, they operate freely without hindrance, stating that even when policemen saw them struggling steering with motorists, they will not intervene.

Alkali asserted that some of the “Agburos” that operate at those bus stops in Lugbe, especially car wash carry dangerous weapons, stressing that they do not mind inflicting injury on their victims if they refused to comply with their demands.