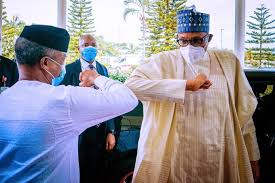 President Muhammadu Buhari stated that his administration is implementing policies and programmes aimed at bringing joy to a greater number of the citizens.

The president stated this in Abuja on Tuesday at the end of the two-day First Year Ministerial Performance Review Retreat, organised by the Office of the Secretary to Government of the Federation to assess the performance of government in the last one year.

He observed that already the policies, programmes and projects had started yielding fruitful results.

“Within these few days we have examined the numerous policies, programmes and projects this administration had embarked upon which are targeted at lifting our people from the shackle of poverty, protect their lives and property and ensure equitable distribution of the nation’s wealth.

“We aim to gradually close the gap between the different classes to bring joy to a greater number of the citizens.

“I’m glad that these policies, programmes and projects have recorded appreciable successes.

“Our renewed vigour on agriculture has been demonstrated through our Anchor Borrower Programme and the Presidential Fertilizer Initiative.’’ he said.

The president, therefore, challenged all cabinet members and senior government officials to defend the government vigorously and not allow “any irresponsible and politically motivated statements’’ to keep spreading falsehoods about the All Progressives Congress led administration.

He also reminded them that the days of insufficient collaboration, coordination and synergy among implementing Ministries, Departments and Agencies should be over.

He, therefore, appealed for more collaboration and synergy among government agencies, so as to enhance development.

“In this regard, I have directed that essential coordination delivery unit in the office of the secretary of the government of the federation should be revived to ensure we focus on results.

“The Secretary to the Government Federation is to ensure regular reports on progress submitted.

“I have charged all of you to defend the government vigorously and not allow any irresponsible and politically motivated statements to keep spreading falsehoods about this government.

“Information to the public should be better packaged, go on the offensive, we are proud of our achievements and we should blow our own trumpets.’’

The president maintained that his administration could not afford to fail Nigerians, who invested their trust in the government.

“I am hereby charging Ministers, Permanent Secretaries and all heads of parastatals to be continuously conscious of their commitment and responsibilities.

“On behalf of the people of Nigeria, I demand the uttermost level of performance, deliverables and results.

“I look forward to a result orientated year with tremendous benefits that will continue to change the lives of our people positively,” he added.

Buhari also noted with delight that the administration under his leadership had learnt lessons in the last one year that would further enhance performance.

“I am confident that the lessons we have learnt in the last one year of implementation of policies, programmes and projects, deliberations and resolutions form the different sessions as well as experience sharing from various speakers, will serve as the needed tool to propel every ministry to the next level of achievement.

“More importantly, the trust reposed in us by Nigerians remains the ultimate driving force.

“We cannot afford to lose focus, regardless of the challenges. Our eyes must therefore remain fixed on the ultimate goal.

“More than ever before, I charge us to play as a team, because that is what we are, to this end, the days of insufficient collaboration, coordination and synergy among implementing Ministries, Departments and Agencies should be over,” he said.

The Nigerian leader then directed the office of the Secretary to Government of the Federation to reactivate its Central Delivery Coordination unit to enhance performance.

“In this regard, I have directed that the Central Delivery Coordination unit in the office of the Secretary to Government of the Federation should be revived to ensure the much-needed synergy and focus on results.

“The Secretary to Government of the Federation is to ensure regular reports on progress are submitted,” he said.

The president also directed Minister of Finance, Budget and National Planning and the Governor of the Central Bank of Nigeria (CBN) to ensure speedy and timely release of funds to MDAs for implementation of the N2.3 trillion economic sustainability plan and the capital projects in the 2020 budget.

He, therefore, enjoined ministers to ensure efficient and transparent utilization of funds released for the implementation of the programmes and projects under the nine priorities areas of government.

Secretary to the Government of the Federation, Boss Mustapha, noted that the Buhari administration has made some progress, adding that “we have the potential to do more in order to transform our country and improve the lives of our people’’.

He revealed that, based on the independent assessment of the Performance on Ministerial Mandates across the Ministries by the staff of the Office of the Secretary to the Government of the Federation and their Technical Partners and the plenary conversations, five key issues emerged:

*The need for Key Performance Indicators and annual targets that smartly define success of interventions in each priority area for improved performance assessment going forward.

*The need for inter-agency collaboration to drive delivery and synergy among implementing MDAs.

*The need to accelerate the implementation of the Economic Sustainability Plan in order to respond to the challenges associated with COVID-19 pandemic; and

*Adequacy and timeliness of fund releases to execute projects and programmes of the Ministerial mandates.

According to him, as part of the strategy towards ensuring effective realization of these objectives, the OSGF will sustain the ongoing discussions after the retreat with ministers with a view to “reviewing and re-prioritizing interventions in the light of the lessons learnt, so that we can deliver as agreed.’’

He, therefore, stressed the need for ministers and heads of agencies under their supervision to work together to strengthen inter-agency collaboration to drive delivery and synergy among implementing MDAs.

The two-day retreat was declared open on Monday by Vice President Yemi Osinbajo on behalf of President Buhari, who was away to Niger Republic, to attend the 57th Summit of Authority of Heads of State and Government of ECOWAS.