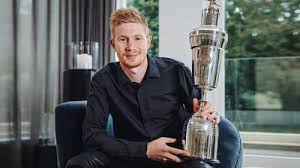 However, despite beating him to the award, Henderson stated that De Bruyne deserved the award.

“Congratulations to @DeBruyneKev on winning the @PFA Players’ Player of the Year award. A class act on and off the pitch. Well deserved,” Henderson wrote on Twitter.