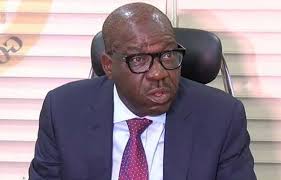 Edo State Governor and Governoership candidate of the September 19 election, Godwin Obaseki, has said he would accept defeat in the upcoming gubernatorial elections provided the elections is free and fair.

The Governor, however, said the issue of him losing the election is irrelevant, saying there is no strong opposition in the elections.

Obaseki, who spoke in an interview with journalists shortly after meeting with the Inspector-General of Police (IGP), Mohammed Adamu, in Abuja, expressed fears over the security situation in the State, where violence has been recorded without any arrest, said he was satisfied with the outcome of his meeting with the IGP.

Obaseki, when he was asked what his reaction would be if he loses in the elections, he said: “First, if you have been watching you will see that the election is almost a no contest because we can’t even find the opposition party in the field. So, the issue of me losing is very, very remote, except something miracpus happens.

“Secondly, if I lose in a fair contest, as a democrat, I will accept it. But, from what we know today and from evidence of what is available, Edo people have spoken and we just want an opportunity for them to express their views on that day. So, our concern is that people be allowed to vote peacefully and express themselves the way they decide”