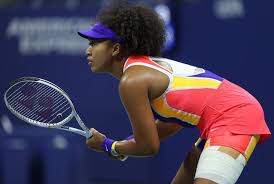 Naomi Osaka has booked her third Grand Slam quarter-final at the US Open Sunday night, dismissing No. 14 seed Anett Kontaveit, 6-3, 6-4.

Osaka, who was the 2018 US Open champion is now the only Top-10 player remaining in the top half of the women’s singles draw.

The No. 4 seed put on another clinical display at the Arthur Ashe Stadium to improve to 4-0 lifetime against Kontaveit, and proceeded to the finish line much quicker than she did one week prior, when the pair played three sets at the Western and Southern Open.

“I’m just going into it very optimistic,” Osaka said of her next match with Rogers. “For me, I feel like I would be the underdog since I’ve never beaten her. I’m just happy to still be here,”

While concern about the left hamstring injury that Osaka carried into the tournament still exists, she showed no signs of struggle with her movement, despite wearing the same heavy strapping on her left thigh that she has sported all week.

“It felt actually better today,”” she said on court after the match. “I felt like I was moving quite well, so I’m really happy.