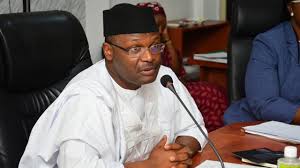 Independent National Electoral Commission, INEC, has expressed concern over remarks by political actors which could stir violence and truncate the governorship elections in Edo and Ondo States.

Chief Press Secretary of the Commission, Rotimi Oyekanmi, stated this yesterday at a webina organised by the International press centre, IPC entitled: ‘Edo/Ondo Elections: The imperative of Safety Consciousness and Conflict Sensitivity in Media Coverage and Reportage’

He said: “As we approach the Edo Governorship election, it is clear that the good people of the state and Nigerians as a whole are very concerned about what will happen on election day.

“We have all been hearing the loud drumbeats of war from political actors. There have been accusations and counter accusations. Just like everybody else, the Commission is deeply concerned.”

Oyekanmi, however, noted that regardless of the threat, utterances, INEC would conduct a credible and fair contest.

He further assured journalists of their safety unlike previous experiences particularly with security agents.

“To be sure, INEC is ready for the election. Indeed, we are determined to conduct the election despite the current difficult circumstances.

“To that extent, regardless of the not-so-pleasant experiences Journalists might have experienced with security agents during elections in the past, they are rest assured of a good experience this time round,” he said.

He added that, “Out of the 14 activities listed in the timetable that we released in February, we have carried out 12. The only two left are the deadline for campaigns – 17th September and the election proper slated for 19th September.

“All the logistics needed for the election have been taken care of. The non-sensitive materials have been delivered to the 18 local government areas of the state.

“Our Electoral Officers, their Assistants and Supervisory Presiding Officers have been trained. Officers nominated by the various security agencies under the Inter-Agency Consultative Committee on Election Security, ICCES have also been trained and their actions will be guided by the Code of Conduct and Rules of Engagement for Security Personnel on Electoral Duty.”