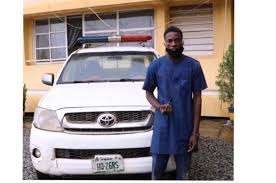 A 25-year-old man, Hamisu Tukur, has been arrested by the FCT Police Command for allegedly stealing a vehicle belonging to the Federal Road Safety Corps, FRSC.

Confirming the report, DSP Anjuguri Manzah, Police Public Relations Officer, said the suspect was apprehended at the outskirt of Bwari.

He explained that the vehicle was stolen at Sky Memorial Complex in Wuse Zone 5.

Tukur was intercepted by Bwari Division police operatives during a stop and search operation and the vehicle was retrieved from him.