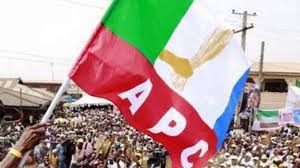 All Progressives Congress, APC, has warned that it will not accept the result of any parallel primary election held in Imo North Senatorial District aside from the one approved by the party.

APC, in a statement issued on Thursday by its Deputy National Publicity Secretary, Yekini Nabena, clarified that the Senator Surajudeen Ajibola Basiru-chaired Primary Election Committee for the Imo North Senatorial District By-Election is the duly appointed and legitimate panel empowered by the Governor Mai Mala Buni-led Caretaker Committee to conduct the exercise.

It said the clarification became necessary, in view of media reports of a purported ‘parallel’ Primary Election for the legislative By-Election in Imo State.

The party stressed that only outcomes from the Senator Surajudeen Ajibola Basiru-chaired Primary Election Committee would be tenable by the party.

The Party’s Primary Election for the By-Election was schedule to hold Thursday 3rd, September, 2020.

Recall that the Independent National Electoral Commission, INEC, had announced that all pending legislative elections both in States and Federal levels will be conducted concurrently on October 31 across the country.