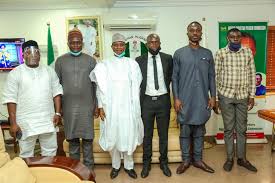 He made this assertion in Abuja while receiving in audience, the Executive Director of Citizens Awareness Against Corruption and Social Vices Initiative, Mr. Olumuyiwa Onlede.

The NCPC boss frowned at the situation whereby corrupt people enriched themselves with the money meant for our common wealth by diverting it for their personal benefits.

He also decried a situation where leaders would loot the resources of their States only to leave behind massive debts for generation yet unborn.

Rev. Pam commended the organization for their efforts in creating awareness against Corruption, stressing that their efforts should be celebrated by all and sundry at a time when the young ones were being distracted by materialism and unhealthy ventures.

He explained that corruption is not only about embezzling money in the office but laziness.

The Executive Secretary called on the youth to wake up and contribute their quota to national development as he also urged them to use their talents to better their youthful life rather than indulging in criminality.

He informed them that the Commission’s stand on corruption cannot be compromised, saying that he would collaborate with their NGO and other non-governmental organizations that are also involve in fighting corruption.

His words, “lets join hands together to see how we can partner, we will do our best to support you”.

He further promised to collaborate with them to improve the image of NCPC and Nigeria at large.

The Executive Director, who stated that Corruption had been the bane of the nation’s development, urged the NCPC boss to work the talk by ensuring that the fight against corruption which the present administration is hinged on, be applied in NCPC.

Onlede affirmed that they had no doubt that the NCPC boss would deliver on his mandate considering the fact that he is a tested performer.

He prayed that the Lord would grant him the wisdom to carry every member of staff along.