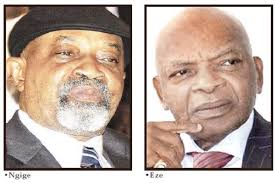 Minister of Labour and Employment, Dr Chris Ngige has berated Anambra businessman, Prince Arthur Eze, for casting aspersions on him over his advice that the 12 traditional rulers suspended by the Anambra State Government, should be relocated from their communities to avert breach of peace.

Ngige described Prince Eze as ‘a fair weather politician’ who befriends “any government in power,” and uses his wealth to intimidate, oppress and brutalise the downtrodden people in Anambra State communities, bordering his Ukpo hometown in his land grabbing spree”.

The two-time Minister stated this while reacting to the scathing attack on him by the controversial Anambra businessman.

Eze had on Sunday issued a press release through a freelance journalist, Oliver Okechukwu Okpala, where he attacked Ngige in reply to media reports that the former Anambra State Governor had called on the incumbent Governor, Willie Obiano, to banish him (Eze) and the suspended traditional rulers.

Governor Willie Obiano had sanctioned the 12 traditional rulers for travelling out of the State without clearance in order to accompany businessman, Arthur Eze to Aso Rock on what they tagged, “a thank you visit to Mr. President,” for his infrastructural development in the South East and what he has done for Igbos.

Reacting to the attack on him by Eze, which he viewed as unwarranted and indecorous, Ngige said “Arthur Eze is a fair weather politician, a political turncoat and an apostle and Commander-in-Chief of members of “any government in power,” (AGIP) in Nigeria.

In a statement from his media office signed by Emmanuel Nzomiwu, the labour Minister explained that as a former Governor and elder of the State, he had only advised Anambra State Government to relocate the traditional rulers out of their domain for administrative and security reasons.

According to Ngige, when officials of government are suspended, and in this case, these government certified traditional rulers are suspended from office, they cease to perform the functions of the office and hence, they should not be allowed to be visiting or threatening those carrying out their functions by still visiting the office whether it is in the palace or elsewhere.

“Much more importantly, the suspended traditional rulers have started experiencing violent protests, demonstrations and calls for their outright dethronement in their respective communities of Abacha (Idemili North LG), Alor (Idemili South LG), Aguleri Enugu Otu and Mkpu Nando-Otu Aguleri, both in Anambra East LG as well as in many other places, thereby raising security concerns.

The statement noted that “there is no time Ngige as a man of rule of law, asked for banishment of Arthur Eze, an act which would have run against the tenets of the 1999 constitution, as amended.

“But, this does not derogate from the fact that Senator Ngige had said that from the facts- video clips-in the media and in the public domain, Eze had engaged in an act of sabotage, against the government and people of Anambra State.

“Arthur Eze had sabotaged the Anambra State Government by gathering a group of disgruntled persons, some gullible and even non recognized traditional rulers for ‘a thank you visit’ on behalf of the South East when in actual fact, no traditional ruler from Enugu, Ebonyi, Abia and Imo states, was in his motley gathering of Ezes.

Senator Ngige asserted and stood by his earlier statement that Arthur Eze should be sanctioned and punished for the act of sabotage, of aiding and abetting those traditional rulers, who travel out of their kingdom without appropriate clearance from the Anambra State Government, an action for which all of them have pleaded guilty and apologized to the Governor.

The statement equally debunked the claim that Ngige lived in FESTAC before Arthur Eze rented a decent apartment for him in Lagos and helped him change his Volkswagen car.

“In 1980 he was already living in comfort in the 1004 Estate, National Assembly Wing, Victoria Island, having been moved from his temporary accommodation in the Federal Palace Hotel, Victoria Island where he stayed when he arrived in Lagos as a youth corps medical doctor.

“Rather it was Prince Arthur Eze who had been a family friend since 1967 that relocated from his elder brother’s house in Kirikiri to squat with him (Senator Ngige), he(Arthur) having come back from the USA in 1979 and doing the petty trading, buying and selling trips (Afia attack) to London, in the United Kingdom.”

Ngige said whiile he had nothing against the traditional rulers personally as four of them are his friends, just like Prince Arthur Eze, a friendship that started in1967 in their boyhood days during the civil war, but as a former Governor, Senator and Minister from Anambra State, he would not sit by and watch while the seat of Governor of Anambra State was being desecrated, diminished as if a single individual or persons are above the state authority.

“The seat must be respected by all of us, especially when we were not campaigning for elections.”

He pointed out that “there is an ocean of difference between a wealthy man and the man with the authority of the state.”

The Minister insisted that “whoever is Governor of Anambra State irrespective of party affiliation-APC, PDP, APGA or ADC-is the numero uno and sovereign of the state and sits on a seat which by the collective resolve of the people through the ballot box has been bequeathed to him or her.

He declared that an elected governor must therefore be allowed to govern the state unfettered, unhindered and without distractions,” in order for such a person to give an appropriate account without pleading alibi for his stewardship here on earth and in Heaven when he or she meets with the creator.