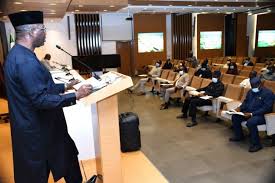 The new Permanent Secretary, Federal Ministry of Works and Housing, Mr. Ernest Umakhihe, said he plans to achieve his mandate by mobilizing staff to work as a team with the minister.

Umakhihe made this known in a statement signed by Mrs Boade Akinola, Director of Press FMWH, in Abuja, after the formal handing over of the affairs of the Ministry by the Director Overseeing the Office of the Permanent Secretary, Mr. Yemi Oguntominiyi.

Umakhihe acknowledged the enormity of work in the Ministry but assured that he was poised to take up the responsibility.

“I want to thank you for this reception.

”The Minister told me on Monday that there is a lot of work at the Ministry of Works and Housing and that I have joined a moving train.

“I told him no matter how fast that train is, I will make sure I am able to log onto it and then within a short time I will be fully on board and even join the Driver.

“ I am open and transparent in all my work and I do hope you will extend same to me in the course of our duties,” he said.

Earlier, Oguntominiyi, Director Highway Construction and Rehabilitation of the Ministry, who also oversees the Perm. Sec Office said he was confident that Umakhihe would move the Ministry to greater heights, due to his robust experience and having served in a similar capacity in other Federal Government establishments.

While welcoming the new Permanent Secretary, he said, he had served in some ministries and have the requisite experience to man the affairs of this ministry.

“He is undoubtedly suitable for the new assignment,” he said.

He thanked his colleagues and the entire staff for the spirit of comradeship and cooperation extended to him while overseeing the office of the Perm. Sec.

Born on April 5, 1964, Umakhihe was a professional accountant and a core technocrat.

He has plied his trade in the public service for years, served in the office of the Accountant General of the Federation, Ministry of Foreign Affairs, and Ministry of Defence.

Also, he had served in the Ministry of Finance, Budget and National Planning and Office of the Head of Service of the Federation.