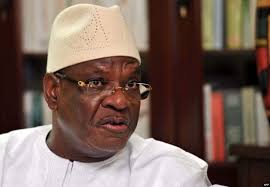 Ousted president Ibrahim Boubacar Keita of Mali, who was freed last week by the military junta and restricted to his home, was hospitalized late Tuesday at a private clinic in Bamako.

The health of the 75-years old Keita has deteriorated after being detained for 10 days by the junta now in control of the country.

It was unclear whether he would be evacuated abroad for medical treatment given the circumstances.

He had reportedly told the junta he needed medical treatment in Abu Dhabi.

The former Malian president has appeared gaunt in recent photographs, and concerns only mounted during his time in military custody in the barracks at Kati outside the capital.

Keita, who was first elected in 2013, had three years left in his term when mutinous soldiers arrested him at his residence.

Hours later, he appeared in a midnight broadcast on state television, and resigned his office.

He however told Malians he wanted to avoid bloodshed.

Officials from the junta, called the National Committee for the Salvation of the People, had said Keita was held at the barracks for his own protection.

A protest movement against Keita´s presidency saw tens of thousands demonstrate in the streets in the months leading up to his overthrow.