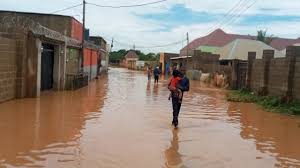 Flood has destroyed houses and properties of residents in Asikolaye, Kaduna South Local Government Area of the state.

The flooding, which occurred after a downpour on Monday evening, lasted till Tuesday morning and has forced many residents out of their homes.

Some of the residents in the affected area told NAN that the flood occurs once in two years.

Aisha Mohammed, whose house was submerged, said she tried without success to salvage some of her property.

She called on the government to offer some assistance to her and other victims of the disaster.

Ibrahim Shehu said he lost several domestic animals and was forced to slaughter them.

He said though he heard the warning of the flood by SEMA, but he had nowhere else to go.

She said that there was no record of deaths or missing persons from the flooding.

“We are hoping the flood will subside before the end of the day.”

Sunday Awulu, Secretary, Red Cross, Kaduna State said nine persons were rescued, while several others refused to vacate for fear of their property being stolen.

NAN recalls that the National Emergency Management Agency, NEMA, SEMA had warned of imminent flooding in some parts of the state and advised people living close to river banks or flood prone areas to move to safe grounds.