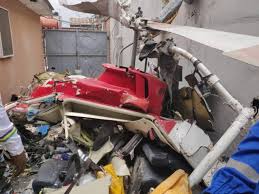 Accident Investigation Bureau, AIB has said the ill-fated Bell 26 B III helicopter belonging to Quorum Aviation was not designed to have a Flight Data Recorder, FRD otherwise known as black box on board before it crashed.

This is coming five days after the helicopter with nationality and registration mark 5-BQW which crashed into a public building on Opebi area of Lagos killing all the three crew members on board.

The Bureau also assured that the preliminary report on the cause of the accident will be released in few weeks’ time.

Equally, AIB said it has given Quorum Aviation, operators of the Bell 206 helicopter the clean bill, saying the crashed helicopter had a valid Air Operator’s Certificate that will expire on November 20, 2020.

Addressing aviation journalists at the Lagos office of the AIB, the Commissioner of the Bureau, Akin Olateru said the purpose of the media conference was to discourage further unsubstantiated comments on the crash, adding that contrary to speculations, the AIB had not retrieved an FDR from the crashed chopper.

According to Olateru, the ill-fated chopper did not meet the necessary criteria for an FDR and was not featured with one.

“We would like to clarify that AIB did not retrieve an FDR from the aircraft as the Bell 206 is certified at approximately 1,519kg (3,350lbs) and featured five seats. It does not meet the necessary criteria for an FDR and was not featured with one.

“It is extremely important to note that the aviation industry is the most regulated industry globally and its operations are regulated in accordance with the International Civil Aviation Organization (ICAO).

“The installation and application of FDRs in aircraft is guided by ICAO Annex 6, Parts 1 and 2. The basic standards for both parts are essentially similar. Part one applies to commercial aircraft while Part 2 is for non-commercial operations.

“An FDR on the aircraft would have aided the investigation but nevertheless our world class trained investigators are competent to retrieve information about a crash from the wreckage and several other components of the aircraft, the site of the crash, communication with the ATC, and other documents on the aircraft,” Olateru said.

While saying that investigation was ongoing to identify what led to the crash, the AIB Commissioner warned that any conjecture about the crash at this stage maybe detrimental to the process.

The commissioner said though the crash happens to be the first aviation fatality the country will suffer in over five years, he still described Nigeria as one of the most ranked in the world in terms of flight safety.