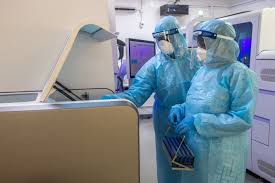 Minister of Health, Dr Osagie Ehanire has said that the testing for the coronavirus in Nigeria is grossly inadequate in a country with over 200 million people.

Ehanire stated this at a press briefing of the Presidential Task Force on COVID-19 on Monday in Abuja.

He said that most laboratories across the country were operating below capacity, adding that efforts were ongoing to ensure provision of at least one laboratory in every state.

“Our target is to test two million Nigerians for COVID-19, of which we have achieved barely a quarter.( Actually a fifth)

“However, plans have been concluded to set up and optimise laboratories in all states.”

According to the minister, there has been a significant drop in COVID-19 testing due to reduced sample collection across many states for reasons not clear in all cases.

“These are just examples that show that there is more work to do and many more challenges ahead.

“We shall commission a study group of the Ministerial Experts Advisory Committee to begin processes to examine this development, to bring up new knowledge which can guide response or may have an implication on government decision making.

“With a total of 1,013 deaths recorded so far, the case fatality rate has also dropped slightly to 1.88 percent, the gradual fall is possibly an indication of improvement in response and treatment strategies to contain COVID-19 and also a common global trend.

“As long as we still record deaths from this disease, there is no room for complacency,” he said

As at Monday, Nigeria had done 403, 407 tests, usually on people who stepped out to be tested.

Out of the tests carried out, Nigeria has 54,008 confirmed cases.

But is the testing inadequate? Or does Ehanire and the NCDC just want to do testing for testing sake to justify the N10 billion recently released by President Buhari?

According to the World Health Organisation, countries that do very few tests per confirmed case are unlikely to be testing widely enough to find all cases.

The WHO has suggested a positive rate lower than 10% – but better lower than 3% – as a general benchmark of adequate testing.

Surely, Nigeria is far from the WHO benchmark as it has a ratio of one positive case to about eight tests.

South Africa so far has 625,056 cases out of 3,674,872 tests conducted, according to records posted by worldometers.info. The ratio will be one positive case to six tests.

However, some African countries have met the WHO benchmark for testing.

Morocco is one of the clear leaders. The North African country has carried out 1,890,964 tests.

Out of the tests have emerged 61,399 cases. The testing and confirmed cases work out in the ratio of 1 case to about 30 tests.

Rwanda is another country that has conformed with the WHO standard. It has done 404,944 tests and confirmed 4,020 cases. This is about one positive case to 100 tests.

Uganda is also another conformist. It has carried out 367,423 tests and fished out just 2,928 cases. Again, the ratio is like Rwanda’s.

Ethiopia has also done well to conform with WHO recommendation. So far, it has confirmed 51,122 cases out of 890,929 tests conducted. That is a ratio that approximates 1-19.

Senegal has also done 146,218 tests and has established 13,611 cases. It still falls within the WHO bracket, at least 10 tests for one case.

In East Africa, Kenya has also largely conformed with WHO recommendation, having accomplished 454,406 tests to get 34,201 cases.

Our Conclusion: Ehanire was right. Nigeria has not done adequate COVID-19 tests. It needs to expand the scope and in doing so, find quicker and cheaper methods of doing the test, as being done in other countries, for accelerated results.