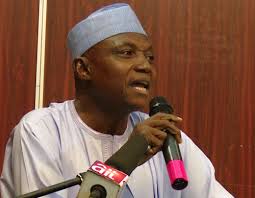 The Council had during it’s meeting presided over by President Buhari ratified the appointment of Agara as Chairman of the NPC.

The body, made up of former Heads of State, President, Vice President, Senate President, Speaker, governors, some ministers, and senior government officials, also approved the composition of membership of the commission, the Secretary to the Government of the Federation, Boss Mustapha, said on Thursday.

In the document marked ‘SECRET’, dated August 12 and sent to the Council members, Agara was named as Chairman, according to a report by Premium Times.

However, hours after the Council meeting, Shehu sent a brief message to journalists announcing one Nasiru Kwarra, a Muslim also from Nasarawa State as Chairman.

According to findings, Shehu disrupted the entire arrangement with his message to journalists, who reported the narrative he sold to them.

SaharaReporters had earlier reported how some officials within the Nigerian Government were not contented with Agara’s nomination being a Christian.

A government source confirmed to SaharaReporters that Governor Abdullahi Sule was among top Northern Muslims, who worked against a Christian being appointed to head the commission.

“Governor of Nassarawa and Chief of Staff told Buhari not to handover NPC to a Christian,” the source said.

In 2019, Nigeria’s First Lady, Aisha Buhari, alleged that Shehu had switched his loyalty from her husband to some cabals within the Presidency.

She accused him of taking orders from Mamman Daura, Buhari’s nephew, instead of her husband and also meddling in the private affairs of the first family.

Observers say the latest move by Shehu tallies with those projections.