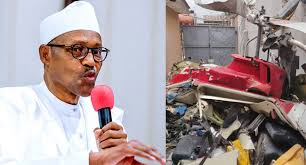 A Bell 206 copter belonging to Quorum Aviation crashed into a building at Salvation Road on Friday, killing two people, with one injured.

Reacting to the development, Buhari, in a statement issued by his Special Adviser on Media and Publicity, Femi Adesina, commiserated with the families, friends and associates of victims of the Bell 206 helicopter operated by Quorum Aviation which crashed on Friday.

He said the nation was still awaiting report of investigation into the accident by the aviation regulatory agencies.

According to him, “While the nation awaits report of investigation into the accident by aviation regulatory agencies, the President prays that God will console the bereaved families, grant peace to the souls of the dead and speedy recovery for the injured.”

Earlier, Dr. Femi Oke-Osnyintolu, Director General, LASEMA, had said three people were on board the aircraft when it crashed.

He said the agency received distress calls concerning a privately operated helicopter that crashed into 16 A Salvation Road, Opebi, Ikeja and he immediately activated the emergency response plan.

According to him, one person was in intensive care unit at the Lagos State University Teaching Hospital, LASUTH, while the two dead bodies had been deposited at the mortuary.

“The helicopter was carrying three (3) people, one is in the intensive care unit at the Lagos State University Teaching Hospital while the other two were killed on impact and there bodies has been deposited in mortuary.